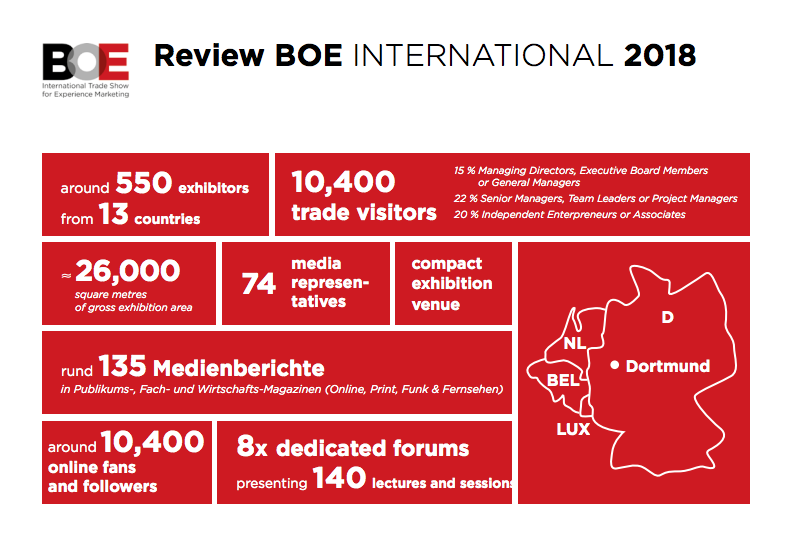 Germany’s largest trade show for event professionals takes place every year in January in Dortmund. Best of Events International is attended by delegates from all over Europe including attendees from Germany, Austria, Switzerland, Poland and The Netherlands.

Four halls of exhibitors show a variety of event services and products to over 10 000 attendees. This is the first year an International Tech pavilion has been set up to answer attendee requests for a greater variety of event technologies. Powered by Event Tech Lab, the tech pavilion will exhibit both established and start up technology companies.

If you are interested in exhibiting on the International Tech pavilion, email james@eventtechlab.com 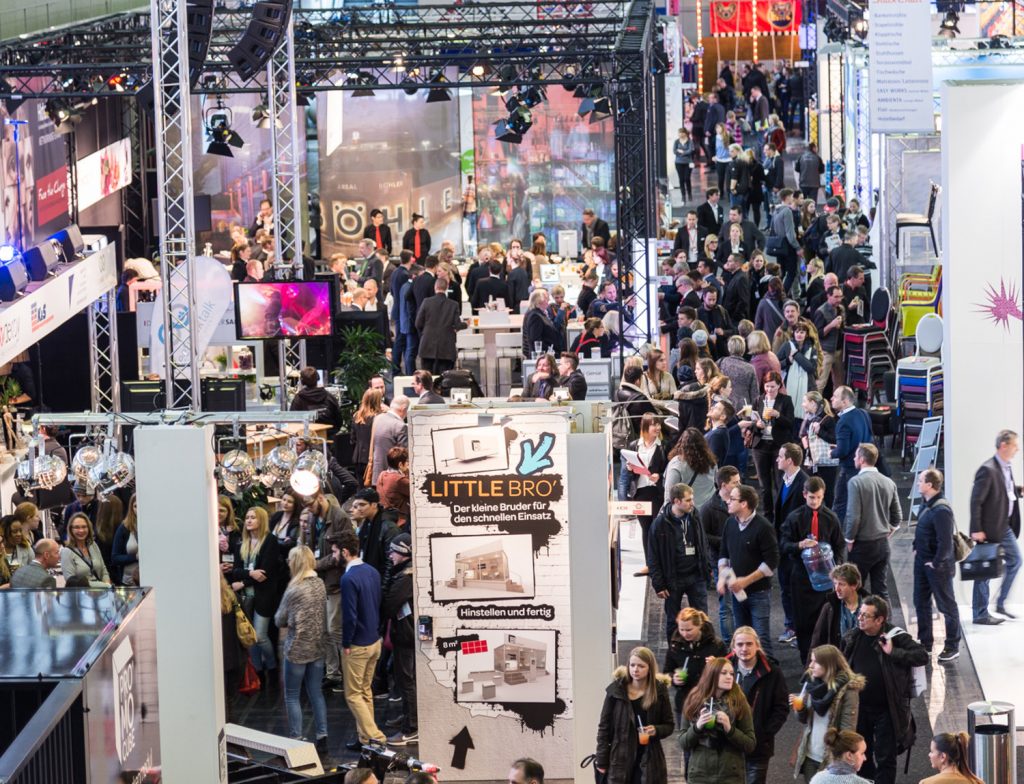 Celebrate London Tech Week with fellow event professionals and event technology companies. Come along for some light-hearted banter, great music, cold beer and wine and a tasty BBQ. Talk about nerdy tech stuff, your events and exchange ideas and knowledge on technology and innovation in the events industry. 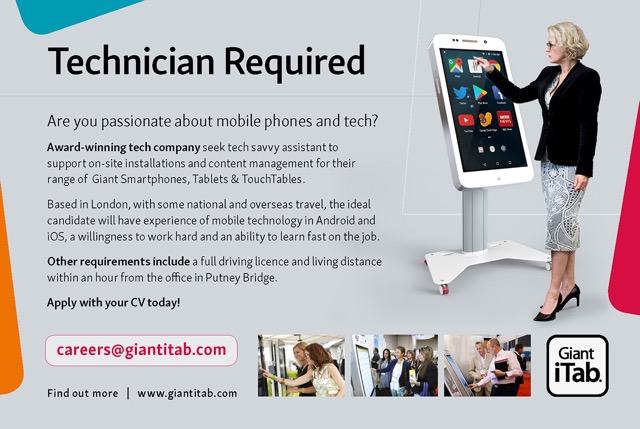 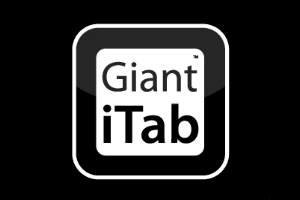 Fast growing Event Technology Company based in Putney, London, seek an organised and pro-active Sales & Operations Manager based in London. The role requires a self-starter with some events, mobile or AV Tech experience to assist with sales and operations of UK & International event tech rental markets.

Touch2view Limited are creators of the Giant iTab – an award-winning touchscreen technology in the form of Giant Smartphones & Tablets for creating digital engagement and interaction for retail, corporate, banking, exhibition and event organisers both in the UK and overseas. They are a small but fast growing London based company with an enjoyable & challenging environment offering good personal and professional development opportunities for the right candidate who can contribute significantly to their global growth plan. If you would like more details or to apply for the role, you should go to this link – Giant iTab.

The organisers of Scotland’s events expo Eventit are offering technology start ups exhibiting space and an on-stage pitch in the technology theatre exclusively to the Event Tech Lab community. Eventit is taking place at SECC Glasgow on 9th March 2017.

They are offering a discount package for £400 +VAT in the Technology Zone.

If you are interested in more information on this opportunity or would like to book a space, please email
Judith Wilson judith@eventit.org.uk

You can take a look at the Eventit website here. 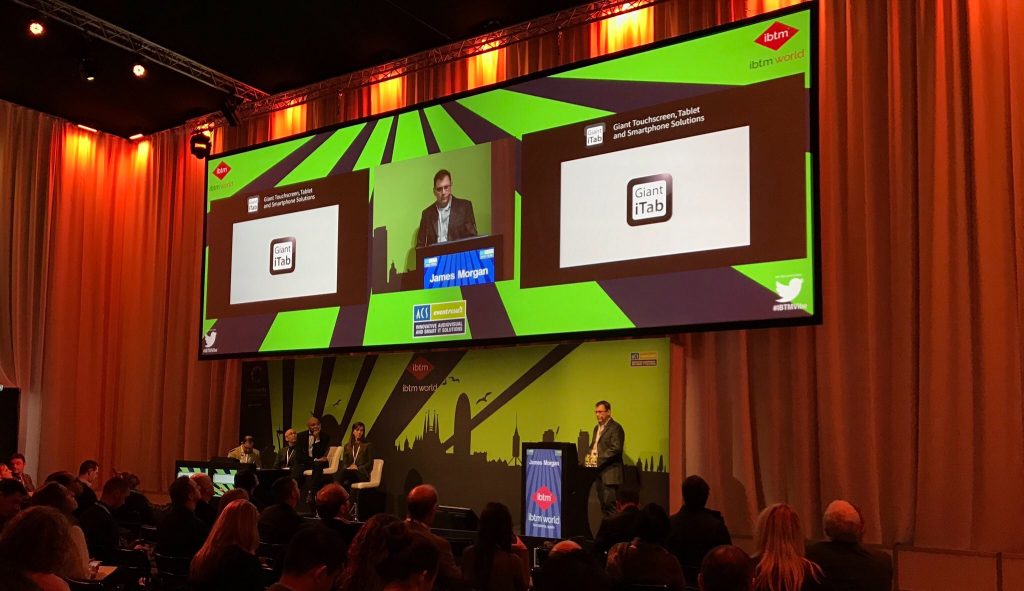 It’s all happening from 6pm to 9pm on Tuesday 31st January at Huckletree Shoreditch
Join us to keep up to date with the freshest developments in event technology. Technology pitches and demos will be followed by the announcement of the technology start-up winner of the Exhibition News competition to WIN a free exhibition stand at #EventTech17, co-located with International Confex, Event Production Show and Office* (Olympia 1-2 March 2017).

We will also be hosting a panel discussion on PR – What’s The Story?

Annie Byrne, Editor Exhibition News; Emma Hudson, Editor Access All Areas; Mark Walker, Head of Content Eventbrite and Tom Hall, Editor Exhibition World will be discussing tips and strategies to create stories that attract PR; with a Q and A following the discussion

REGISTER HERE TO ATTEND THE EVENT 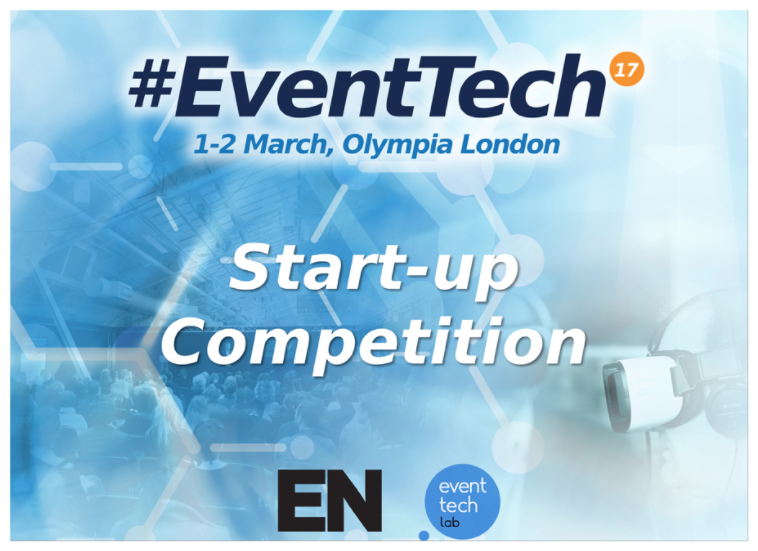 Join us for our October event. Its all happening from 6pm to 9pm on Tuesday 11th October 2016 at Huckletree Shoreditch.

Join us to keep up to date with the freshest developments in event technology. Technology pitches and demos will be followed by Event Tech Talks, sponsored by Event Tech Live. You can attend live or watch the stream courtesy of First Sight Media.

Talk 1: Event Marketing Tactics. Hear from a panel of experts on the tactics to sell more tickets and get greater attendance at events. New technologies and tried and tested tips and tools will be discussed by event marketing experts.  Moderated by Adam Parry, Editor, Event Industry News.

Talk 2: Livestreaming – Tips and Tools for Events. Our experts discuss the advantages and practicalities of livestreaming events. From using Facebook to bespoke applications, livestreaming is a growing trend.

We bring mainstage performances to every event. Headliner’s platform helps event planners connect with bands, musicians and DJs to perform at private events. We are looking for a super smart, motivated self-starter to join our growing team in London.

The Business Development manager will be focused on building relationships and partnering with event planners, public relations departments and personal assistants to introduce and foster their engagement on the Headliner platform.

The successful candidate will have had previous experience in delivering products and / or suppliers to the events industry and come with a strong network and contact book in place to meet the high growth targets set by the management team.

Music industry experience is not essential. An open-minded passion for music most definitely is.

To apply please send your CV and covering letter to jobs@headliner.io

Transport your audience, together with Sublime!

Attend our showcase event in London, where we will be explaining the concept of shared immersion and how it can make an impact in events & experiential marketing through offering a unique immersive experience for your audience. We’ll also be demonstrating the Portal, our pop-up shared immersive solution and, by using some of our own bespoke VR content as well as publicly available 360° film content, that will transport you virtually back in time, to the future, underwater and into outer-space! 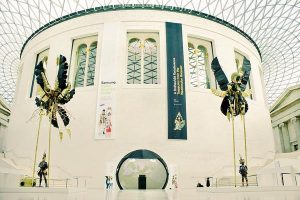 The Football Association, Wembley Stadium and EE approached Nock in 2015 through Havas SE Cake, looking for an innovative and interactive Wembley Tour experience; turning something that largely appealed to football aficionados into a must-see London attraction.  Nock committed to creating a tour centred as much around showcasing Wembley’s charismatic tour guides as the Stadium itself, proposing a deeply immersive experience underpinned by cutting edge technologies being used in new and novel ways.  18 months later, Wembley has just debuted the world’s most technologically advanced stadium tour.

Launching on 18th July 2016, the jewel in the crown of the new Wembley Tour is the EE SmartGuide.  Eschewing the traditional tour pass, the SmartGuide is an EE Harrier smartphone worn around the neck on a lanyard, hardcoded with a bespoke Android app.  The multilingual SmartGuide delivers exclusive multimedia content to tour visitors at 8 distinct points along the Tour route in 10 languages; making use of myriad technologies, including 360° video, augmented reality, BLE and NFC.

To retain the individuality of each guide’s delivery of the tour, they have their own master app running on Samsung Galaxy handsets, which are activated by various beacons placed along the tour route. In a world’s first, the Samsung Galaxy handsets then trigger contextually relevant content on the EE Harriers via Bluetooth Low Energy, enabling the SmartGuide content to be delivered at times of the guides’ choosing. In a few locations, the master app also triggers the playback of additional multimedia via strategically placed speakers and screens. This solution ensures that guides can easily change tour routes to accommodate areas of the Stadium being off limits due to various events and functions throughout the year.

The 20 Samsung Galaxies and 600 EE Harriers in use are all stored and kept tour-ready using 3 bespoke charging carts, allowing each handset to be effortlessly and securely docked and charged when not in use.  Given the high value of each SmartGuide, an innovative anti-theft device has also been built into each one, triggered by strategically located beacons, situated at exit points.

Behind the scenes, the SmartGuide app facilitates a host of opt-in data submission from tour visitors, for which a full backend system was designed and built by Nock in order to securely process, store, report and maintain the resulting database on behalf of The Football Association and in accordance with its strict data protection policies.

Jon Clarke, Special Projects Director at Nock said: “We’re extremely proud to have conceptualised and delivered the world’s most technologically advanced stadium tour at Wembley.  We set ourselves a huge challenge when we came up with the idea of the EE SmartGuide.  Using mobile engagement technologies in new and unique ways as they’ve never been used before created its fair share of obstacles, but we managed to overcome each and every one of these to deliver a project that’s world class and one of our most ambitious yet.  We wholeheartedly believe Wembley Stadium’s first-of-its-kind tour will revolutionise the way mobile engagement technologies are used to enhance both guided and unguided experiences at stadiums, museums and visitor attractions around the world.”

Mat Sears, Director of Communications at EE said: “The partnership between EE and Wembley Stadium has been focused on bringing the best connectivity to the best stadium and our investment in the Wembley tour marks another major step in enhancing live stadium events with the power of technology. From launch, the revamped tech-enhanced tour will further cement the stadium’s position as one of the most connected in the world.”